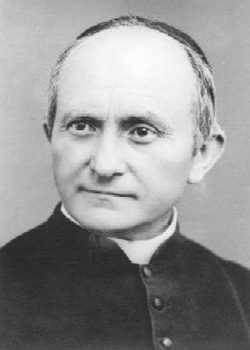 Arnold Janssen was born in 1837 in Goch, a town near Cologne, Germany. After his ordination to the Priesthood he was teaching Maths for many years. During that time he became an active promoter of the Apostolate of Prayer and he came to the realisation that Germany would also need a place to train missionaries.
Due to the Kulturkampf his dream could be realised only outside of Germany in the small village of Steyl in the Netherlands. He bought a tavern that eventually became a huge seminary and mission house.
Father Arnold named his foundation the Society of the Divine Word which became a religious congregation together with two womens’ orders, the Sisters Servants of the Holy Spirit and the Sisters Servants of the Holy Spirit of Perpetual Adoration. Until now these three congregations have been serving in over 70 coutries in the world, giving witness to the love of God and gathering people into one as a sign of the Kingdom of God.